The upper reaches of Madison Avenue have become an ironic, prim respite for fashionable New Yorkers in these lingering COVID-19 days. And one pharmacy, flush with old-timey beauty products and tortoiseshell hair barrettes, is a requisite stop on those high tea outings.

The inimitable Zitomer-which opened in 1950 and has been at its current three-story home at 969 Madison Avenue since 1986-saw this coming. The company, still independently owned, has made pushes on social media-promoting visits from ‘It’ girls like Annabelle Dexter-Jones, Phoebe Tonkin and Laila Gohar, all of whom sulk for photos taken in the store’s mirrored staircase.

Looking to remain on the cusp of relevance, Zitomer’s owner Sharon Sternheim felt like it was time to invest in a full-scale renovation.

“Why fix something that’s not broken? Well, I just felt like I’m 70 years old and I had a choice at this point in my life that I either sell it and go off into the wild blue yonder or make it the most magnificent store I’ve ever seen in my life, ”she told WWD.

More than half a century of Upper East Side tourists and locals have counted on Zitomer for its shelves of remedies, just a stone’s throw away from the Carlyle Hotel. With weathered purple carpeting, yellowed lighting and hovering salespeople, Zitomer’s outdated shoddiness was central to its fantasy of a bygone New York; an escapist beauty haven built on laurels that pre-date lip filler and TikTok trends.

Only in the last five years has it become a new watering hole and social media clout post, particularly during the COVID-19 vaccine rush-where Zitomer was perhaps uptown Manhattan’s second most desirable jab station, only runner-up to the American Museum of Natural History, which gave its patients free tickets and a recovery room underneath its life-size humpback whale model. 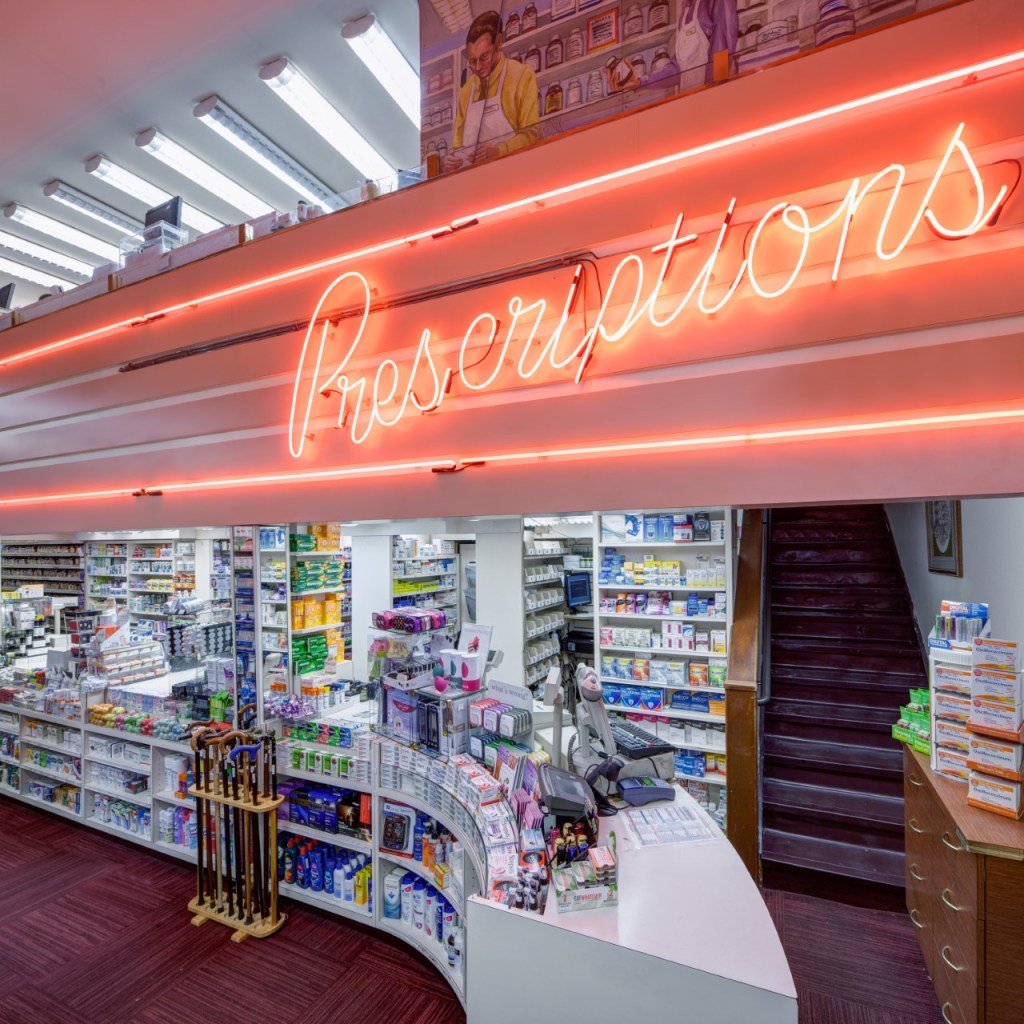 For many now discovering the store for the first time, a trip to Zitomer is filed between finger sandwiches at Sant Ambroeus and a considered purchase of say, Egyptian cotton socks or cashmere slippers at old-timey lingerie store Peress. This is the new recipe for an afternoon many women seek, giving them a taste of less challenging times.

But Sternheim felt a strong desire for self-preservation, and took on the challenge of parlaying Zitomer’s charm into a more modern design and layout that could accommodate social distancing (it is partly a medical store after all).

And so starting last May, she directed her employees to uproot the store’s well-worn headband stand, Chanel make-up counter and shelves of imported German foot creams-all to debut a Zitomer 2.0.

“The neighborhood would kill me if I ever closed the store. It’s a very important entity in the Upper East Side and I think the world still needs places like Zitomer-we are all about customer relations and that old-world charm. We still have a doorman with white gloves who knows your name – it’s just very important, ”said Sternheim.

But when it came time for the update, macroeconomic forces intervened-stretching what was meant to be a three-month project into nearly a full year. Global trade disruptions came for the Upper East Side – nearly upending the Zitomer overhaul. “It was supposed to only be a few months, but look – stuff got held up and couldn’t get through the Panama Canal,” recalled Sternheim.

When the materials did arrive, the store quickly saw an about-face. Gone are the original neon tube lighting and Formica countertops that provided an air of fustier, finer times. They’ve been ripped out-replaced by polished gold-tone fixtures and stark black and white tiling, designed by RPG’s Bruce Teitelbaum in concert with Sternheim and her son Robert, Zitomer’s heir-apparent.

Gleaming with sharp linear design, Zitomer’s shiny new look is a far cry from its previous iteration. But it gives the store room to grow; In a few decades’ time, it could give Generations Alpha and Beta a similar whiff of nostalgia, playing to their idea of ​​perceived innocence and ease.

Sternheim said that the Zitomer renovation has already proven itself a worthy investment. “We have done face lifts in the past but it would stay with the same floor plan and people would complain, but with this one I haven’t gotten one insult – everyone is really elated.”

“The sales have gone up and people are back. It was a major investment but we are seeing proceeds go up, so I think it was the right thing to do. Customers walk through the door and do an about-face. Half of them think they are in the wrong place. ”

Modern lighting and gilded archways illuminate brands that are new to Zitomer, like the much-fabled Augustinus Bader and luxury scent-maker Byredo, while shining a new spotlight on luxury standbys like Surratt and Acqua di Parma.

But there is a stark divide between Zitomer’s perception among young shoppers and the store’s true success. Contrary to what a Brooklyn day-tripper sourcing a grosgrain headband may think, Zitomer’s sales are still about 60 percent hedged on its pharmacy operations. A counter at the very back of the store – now illuminated by a giant “Rx” neon fixture as part of the renovation – is what allows the Zitomer time capsule to stay afloat.

Sternheim, in fact, sits on the board of the National Association of Chain Drug Stores alongside executives from CVS and Walgreens. “Bottom line is we are still a pharmacy at heart. Hopefully that will never change – what’s bringing [new shoppers] in the door is seeing everything else that is totally irresistible, ”she said, adding that the store was among the first three pharmacies in Manhattan to offer Paxlovid over-the-counter.

“We supplied all of the Madison Avenue stores with PPE products. We were teaching people how to dye their hair, how to do a pedicure – things they’ve never had to do themselves before. Headbands were essential – people were not getting their hair done as often and threw on a headband. We were sending them all the way to Palm Beach! ”

Remaining open also meant keeping a sizeable workforce employed. “As many people as you see on the floor, we also have working on the lower level doing shipments and stock. Not too many people know that we have over 60 people working for us, ”said Sternheim.

They are now busier than ever, restocking Zitomer classics that churn off the shelves – $ 120 silken hair bows and Falke hosiery among them. But in the course of renovation, some of Zitomer’s bestsellers have traded places.

Hair accessories have moved upstairs-their rhinestones and Made-in-France luster now accentuated by the mezzanine space’s lilac glitter floor tiling. Sternheim hopes that by giving the hair accoutrements their own little department, sales will be boosted past their current 10 percent share of Zitomer’s income.

Stalwart Zitomer fans have come to know that the store’s plushy headbands, offered in a rainbow of satin, velvet, mink and bouclé, are all labeled with a mysterious tag. On the underbelly of each headband is a singular name, “Anna,” scrawled in bulbous cursive-the marker of an anonymous mother-daughter operation based in New Jersey. At Anna’s discretion, Sternheim would only offer a blurry account of the designer’s identity.

“It’s a real person,” she said. “We’ve carried her designs for 25 years, I think. She’s strong, she has great taste and she’s right up-to-date with fashion-the quality is superb. She’s an older woman, mature – she does her own thing. There are still some quiet entrepreneurs out there. ”

Her headbands join other Zitomer standbys, like the wall of laminated Moiré travel cosmetic brands from a little-known brand based out of California. Seldom seen elsewhere, the bags-so proper and pastel as to be relics from Whit Stillman’s “Metropolitan”-are often mistaken as Zitomer originals and are snapped up by well-heeled tourists staying at the nearby Carlyle Hotel. “We have princes and princesses who come in to buy it with their private plane and buy 12 pieces at a time – it’s wonderful,” said Sternheim.

This is not to mention Zitomer’s many other provisions-lingerie, raincoats, slippers, every size and style of Mason Pearson hairbrush, rhinestone-embellished face masks, and medicinal tonics like imported European psoriasis remedies and every known product from Boiron.

And atop the Zitomer castle is Zittles – an entire floor dedicated to children’s toys and necessities, which in the Upper East Side means a wall of hair bows in collegiate colors to match a myriad of school uniforms.

Pharmacies like Zitomer were once a common sight in New York, but have quickly fallen off the map. Its closest competitors like Clyde’s and Boyd’s, the latter of which would famously map out makeup looks on a paper diagram, have both closed up shop. The Upper West Side’s Apthorp Pharmacy downsized in 2020 to a space about one-third its original size. Only Greenwich Village’s CO Bigelow and the New London Pharmacy in Chelsea remain, and while equally charming, they resonate with a different audience.

In 2006, Sternheim and her late husband made the shrewd decision to purchase the building Zitomer calls home as a 20-year anniversary present to themselves in that space. It’s what has allowed the company – which leases out its top floor to a real estate firm – to remain intact.

But times have drastically changed. To Sternheim, Zitomer and its new look marks a time and place. “I wanted it to look like a landmarked department store with a pharmacy on the Upper East Side. If you think about what’s happened in pharmacies over the past few years – we saved thousands of lives. A pharmacy has never been in that position. Now we are a classical apothecary – I think it’s stunning. ”

FOR MORE FROM WWD.COM, SEE: